No Customer Data Is At Risk

As stated in the CEO statement, corrective actions had been taken once the issues were identified, to restore the affected services for GoDaddy company’s website ( GoDaddy.com ) and also their customers’ websites. Also, the company had implemented measures to prevent the same scenario to be happening again.

In addition, GoDaddy stressed again that : “At no time was any customer data at risk or were any of our systems compromised.” 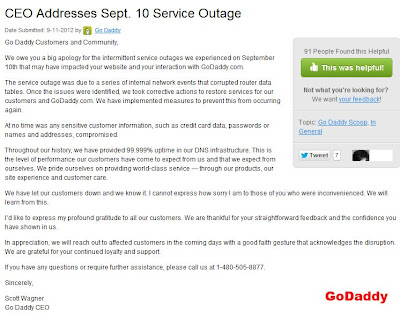 Contrarily to the GoDaddy CEO Statement, a Twitter account named Anonymous Own3r continually to claim the attacks on GoDaddy.com, as well as their services by a tweet: “Go daddy souce code and database leaked by @AnonymousOwn3r pastebin.com/WMb4Qg7H".

However, GoDaddy keeps their notice status on the top of the company’s website as : “ Yesterday, GoDaddy.com and associated customer services experienced intermittent service outages. At no time was any sensitive customer information, such as credit card data, passwords or names and address, compromised.” 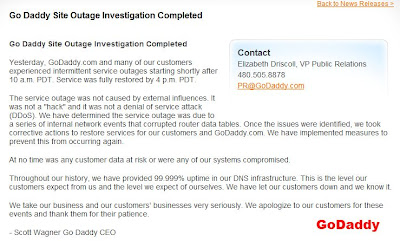 Based on the status of the GoDaddy's update, we assumed that the company does not acknowledge the hacking attacks' claim.

Save 25% On all Intego security products for Mac OS X, including Mountain Lion Protection from Virus, Malware, Worms, Spyware & More